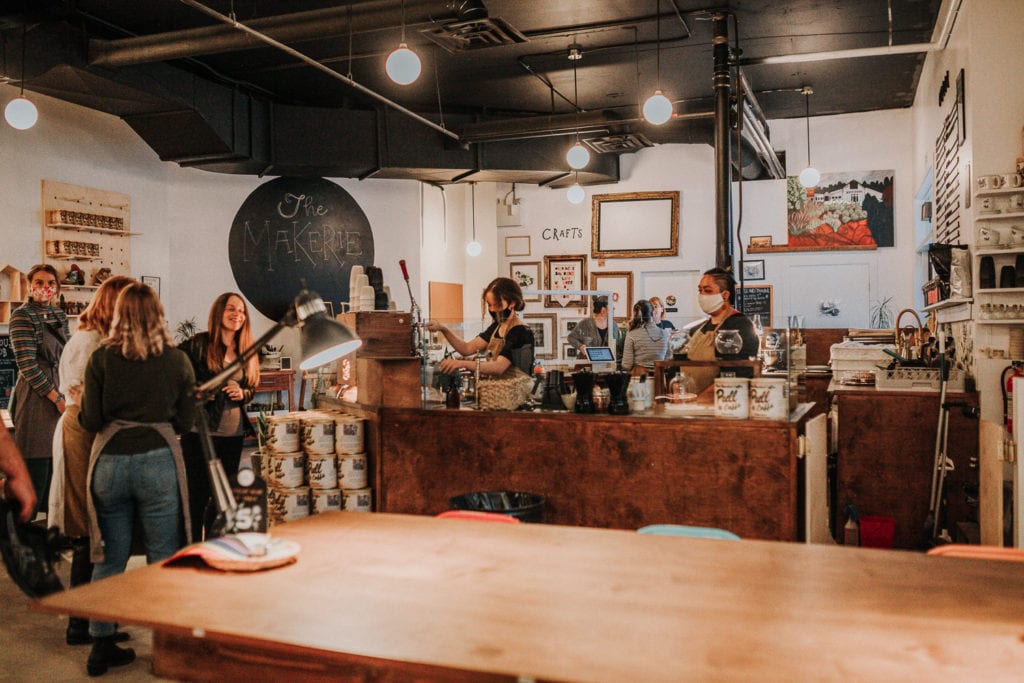 When Kim Hayhurst started pursuing her dream of developing a space where people could flex their creative muscles while enjoying whiskey barrel aged, wood fired coffee, specialty teas, and a selection of gluten-free, vegan treats, she never imagined she would be opening her business during a pandemic.

Kim signed the lease for the future site of The Makerie one week before the COVID-19 pandemic was declared. She and her husband forged ahead with renovating the space they had chosen in preparation for opening their new business because signing the lease had locked them into their plans. But the stress of the unknown weighed heavily on their shoulders in the months that followed.

“We were having to make significant financial commitments without knowing how the next days, weeks or months would unfold. We were interviewing staff and making hiring promises without knowing if the business would even be allowed to open,” says Kim. “In some cases, working with contractors was expedited because they were available and happy for the work as many of their former projects were delayed. In other cases, processes and funding were greatly delayed because staff were being laid off, or inhibited by working from home, or priorities were realigned to dealing with the COVID crises.”

Not only were they starting a new business, but they were opening one with no road map for set-up and operations as it was an entirely new concept. Despite all of these challenges, and after making many adaptations to their business model so they could operate during a pandemic, Kim and her husband opened The Makerie in August 2020.

The space includes seating at mostly large project tables – some low, some standing height – and some smaller tables in a space called “The Nook.” The wheeled tables are equipped with articulated lamps for directed lighting and plug-ins for heating up glue guns and charging phones. Kim had envisioned a communal space, but had to set-up barriers between people to allow groups of one, two, four, or a maximum of six people to sit together. Seating is assigned to ensure “bubbles” are kept in tact. Extensive sanitization procedures have been put in place, which include all tools being cleaned between customers and non-washable materials being kept in bins for 36 hours before being put into new project kits.

The Makerie has been a resounding hit with people despite the significant changes that have been made to the space to ensure the safety of customers, which have somewhat reduced the intended “communal” feel.

“We’ve had people come and tour the space in tears because they’re so excited that such a place exists in Prince George. We’ve had people in tears because they’ve had the best cappuccino they’ve ever had,” says Kim. “We are so thankful for everyone’s incredible support [and] we’re so grateful to be part of the incredible downtown business owners bringing new things to Prince George.”

Navigating the entrepreneurial landscape is a complex and time-consuming process at the best of times and has been made even more complex by restrictions put in place to reduce the spread of COVID-19, but with the support of local residents, The Makerie will continue to offer a unique space for makers to create for many years to come. Visit The Makerie website to see how you can help this small business continue to thrive.

About the author: Christina worked first as a radio journalist and then a public relations specialist in her hometown of Prince George for almost a decade before transitioning into her current role of Workforce Development Officer in the Economic Development Division at the City of Prince George. She has public and private sector experience in economic development, external and internal communications, marketing, social media and website management, event planning, and research. She has a passion for storytelling and for providing support to local businesses to help them grow and thrive.

Get the latest business resources, updates from community leaders, and ideas on how to support our city.

The latest updates, delivered right to your inbox.

Subscribe to our eNewsletter today and get the latest business resources, updates from community leaders, and ideas on how to support our city.